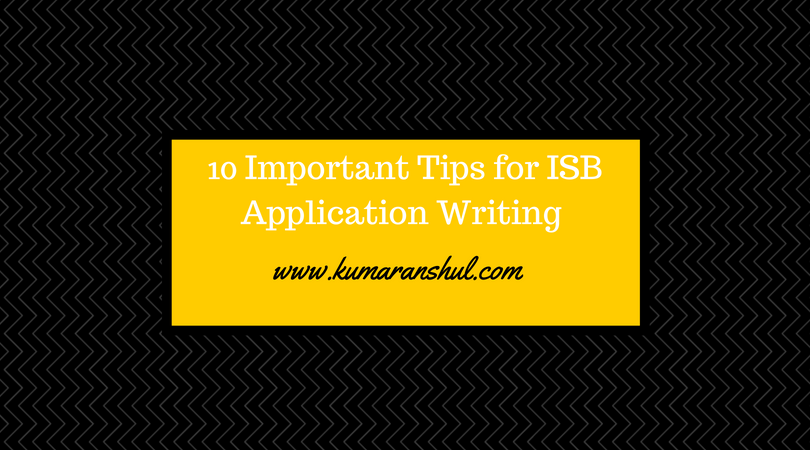 Hello ISB Aspirant. This year’s both Round 1 & Round 2 deadlines are scheduled 1 month earlier than the norm. Assuming you are applying for Round 1 (September 15th), you just have 45 days left to submit the application. It becomes extremely necessary to put your best foot forward for ISB Application at this stage because whatever you put down in your application will be discussed and questioned during the interview. Hence the message is loud & clear- a well-written application is half the work done!

When you actually sit down to write the application, you realize that it is not as easy as it looks- there is a character limit for everything which makes it extremely necessary to know how to pitch perfect your sentences, what to leave and what to include and most importantly how to articulate your thoughts into well-meaning sentences.

There are a few things that you must take care while drafting your application and I have listed them down in the following bullet points :-

I hope this article written at this wee hour of night will add some value to your application. Some other articles that you might find useful are :-

I have helped more than 200 aspirants fulfill their ‘ISB Dream’ (Read reviews of many candidates who have attended my sessions here).

Feel free to message me on Instagram if you have any queries.

To reach out to me, feel free to drop a message on my Instagram- https://www.instagram.com/ansh_isb/

I was never consistent while preparing and the major chunk of my studies happened in last 10 days. Neither did I take a single mock in one sitting.

I am not from Maths background so it was always a nightmare for me. Bought Manhattan Strategy Guide and completed all topics. Then got myself GMAT Club Tets, tried 10 questions from 700 level but couldn’t solve a single of them. Decided not to touch those questions. Solved around 100 600 level questions with 70-75% accuracy. Hence, out of 1500+ Questions in GC Tests, 1000 are still lying unsolved.

Got E-Gmat Verbal Online subscription. Its SC is amazing (but you still need to be thorough with OG). I didn’t find anything spectacular in its CR. Didn’t touch its RC (neither the lessons nor the questions). After finishing started with its Scholaranium (700+ Questions). Did around 150 questions from SC (82% accuracy) and 80-100 questions from CR (72% accuracy). Got bored and didn’t attempt the rest of the questions (So, 60-70% of my Scholaranium is left unsolved as well). As already mentioned, didn’t attempt its RC.

CR– I also tried to do CR from CR Powerscore Bible. Couldn’t solve many questions and gave up in the mid. CR was always frustrating for me. In the end, I decided to stick only with OGs and VRs (both 2015 and 2016 editions). Also did a few (around 60 ) questions from Gmat Prep Question Document downloaded from GmatClub three days before exam.

RC– I had only attempted 5-6 RCs (all from OGs) before the actual exam. Comprehension was never an issue as I have been a voracious reader (My Goodreads analytics show that I have read 43 books in 2015 and 12,500 pages in total). Even last night before the exam, I read one short story by Alice Munroe.

Mocks- Princeton 1- 630, Princeton 2- 650, Gmat Prep 1- 700 (got a few questions which I had already solved before in Verbal) , Veritas- 650, Gmat Prep 2- 620 (10 days before the exam). Didn’t bother to look for the solution of questions I did wrong as I was too frustrated and had almost given up (But had to take the exam anyway as I had booked the dates during the beginning of preparation itself). Never took any mocks after that and decided to build upon what I already knew.

I had screwed up my sleep pattern during the last days (took 10 days off, used to study at night and sleep during the day time). As expected, couldn’t sleep for a single second last night. Kept revising SCs from OG and solved a few easy Quant questions (I had always known that I won’t be able to solve tough quants, hence I focussed on getting the easy ones correct no matter what). Reached near the center two hours ago, sat in CCD which is just in front of the centre. Had coffee and a sandwich. Just before entering the centre, popped up a Modafinil 200 mg (Google what it is) with a can of Red Bull and smoked an iceburst (to keep myself alert).

AWA- Had never practiced this before but wasn’t of much issue. Took 10 minutes to frame my answer and wrote it down in 15 minutes. Revised for grammatical/spelling errors in last 5 minutes.

IR- Solved a few, randomly answered rest of them. I found it too tough. Also, I had never attempted this section in any of the mocks.

Quants- EXTREMELY EASY is the word. I would say it was easier than OGs . Confidently solved 9 out of first 10 correctly (guessed 1). Next questions were easy as well. And I used to get to know by the first look of the question that whether I will be able to solve or not. Hence, randomly guessed 3-4 questions without wasting any time on them. Even then, I missed the last question as time was up (yeah I am that slow in Maths). I got sh** scared thinking about the heavy penalty for leaving a question unanswered. Calmed myself down during the break and ate a chocolate.

Verbal– SC was tricky but easy if you have been a consistent reader and are thorough with basics. Had questions on Comparisons, Rhetorical Construction, Idioms, Use of Present Perfect Tense and so on.

CR as expected was too tough (for me atleast). Infact wasn’t even able to understand the question stem of two CRs. I guessed them randomly and made smart guesses for others. While I was confident of getting most SCs correct, I was hardly sure of 2-3 CRs in total.

RC- 2 short + 2 long. The last one was 4- 5 paragraphs long and was extremely difficult to comprehend (was based on finance and economics). Couldn’t get the gist but tried to eliminate wrong answers somehow.

1. Official Questions are god (specially in Verbal). Do not digress much.
2. In Quants know which question you can’t solve, make a smart guess and move on without wasting time.
3. Mock scores may suggest what you are going to get in the actual exam, but this is not a rule (who knows it better than me ) Don’t stop studying till the last day.
4. Instead of solving tough questions, focus more on making sure you don’t get the easy ones wrong.
5. Make SC your strength. Why? 1st reason- You can easily master it. 2nd reason- It’s the least time taking type of question in Verbal.
6. Never stop reading.

Disclaimer- Above strategies worked for me but there are many people in this group who have scored much more than me, so its better to have their opinion as well.

I am most active on Instagram and will mostly reply there if you have any queries. Follow me- https://www.instagram.com/ansh_isb/

Books that I recently read